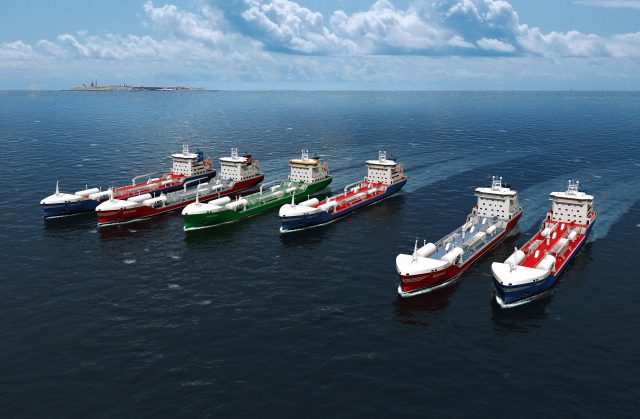 Press release: A break in the trend – The Swedish merchant fleet is now increasing for the first time in several years

The Swedish Shipowner companies Furetank, Älvtank and Erik Thun AB and the parties in the Swedish initiative “Blue Growth” today announced the entry of several vessels to Sweden. For the first time in several years, the Swedish merchant fleet grows. This is a consequence of the improved conditions for Swedish shipping through a series of measures implemented by the government, the trade unions and the Swedish shipping sector; such as the introduction of tonnage tax system, regulatory simplifications, inspection delegation and TAP agreements.

”We had a great cooperation with the maritime trade unions for many years, which has been of great importance for our decision to change into the Swedish flag. Swedish shipping contributes with great social benefits both in the labor market and the economy, but also to the environment. With this decision, we can now take even greater responsibility for the development and improvement of Swedish competitiveness, Lars Höglund, CEO of Furetank, says.

The Swedish merchant fleet has decreased from 254 vessels to 89 during the years 2001-2017. However, the downward trend is now reversed by Furetank, with five vessels of the Swedish flag, three of which are newly built and will be powered by liquefied natural gas (LNG operation). In addition, Älvtank will also change into the Swedish flag with two newly built vessels and Erik Thun AB will change flag for one vessel, including those intended for LNG operations. In total, there are eight vessels with Swedish flag.

”It is extremely gratifying that we managed to break the downward trend of a declining Swedish merchant fleet. The trade Union Seko Seafarers, together with the employer side and the state, has helped to improve the conditions for Swedish shipping through, among other things, adjustments in the so-called TAP system. Now we see that the joint efforts not only contribute to more jobs but also to competitive and sustainable Swedish shipping, ”said Kenny Reinhold, chairman of Seko Seafarers´.

”A strong Swedish merchant fleet is something we build in common. We as a trade union have a responsibility just like the employer and the state. This trend shows that our cooperation has yielded results and that we have good opportunities to continue in the same direction to further strengthen Swedish shipping, which contributes to more jobs, sustainable transport and increased growth, ”says Mikael Huss, CEO of Swedish Marine Officers Association.

”That both Furetank, Älvtank and Erik Thun AB have decided to change into the Swedish flag is extremely pleasing. After several years of decline, we now see that the trend turns. The Swedish flag has finally become attractive and we hope the actions of these three shipping companies in the future will be referred to as the decision to get rid of. The Swedish flag is now so attractive that it should be able to attract more shipping companies and ships in the future. The conditions for the Swedish flag has improved a lot thanks to the work of the unions. In addition, we see that the tonnage tax system is attractive and suits them, making us feel future optimism for Swedish shipping. The flag decision is as I see it a direct result of our cooperation between the parties in the Swedish initiative Blue Growth and policy, Rikard Engström, CEO of Swedish Shipowners´Association, says.

In the context of ”Blue Growth”, Swedish shipowners´association, Seko Seafarers´ and the Swedish Marine Officers Association are working together to raise awareness about shipping’s importance to the labor market, the environment and growth. The goal is for the Swedish Parliament and government to create good conditions for a competitive and sustainable Swedish maritime sector. Together, the organizations now work to improve tonnage tax system so that it can be used by more actors.